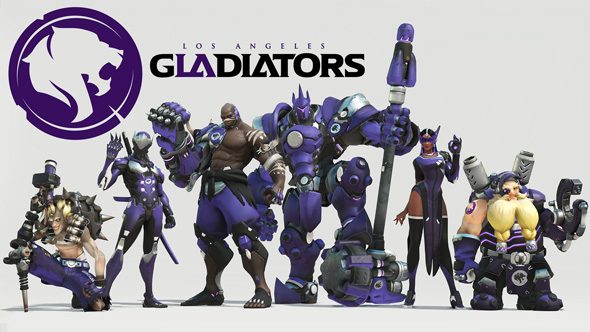 Los Angeles Gladiators is a professional Overwatch team from North America that, as the name indicates, is based in Los Angeles. The team was founded in August 2017 and participates in the League from the Pacific West Division.

It has the honor of being one of the League’s twelve founding members and is also one of the only two professional Overwatch teams from Los Angeles.

The below image provides an insight into the organization of the team by showing their names, IDs, countries of origin, and joining dates.

As the team’s organization members are from three different countries, Los Angeles can be considered as an experienced team.

With a handsome amount of $642,000, Los Angeles Gladiators has made more money than many other teams participating in the League.

A look at the team’s former roster is vital for knowing its past performance.

The below image shows the name, ID, role. along with joining and leaving dates of the previous players of Los Angeles Gladiators.

These players belonged to four different countries. Three of them retired from their careers whereas the remaining five joined other teams.

Most of the players stayed in Los Angeles Gladiators for more than 2 years which is considered a good enough retention period in the eSports industry. This is an indicator of the fact that the players were satisfied with the team’s overall performance.

The below image throws light on the active roster of the team which currently consists of eight players from four different countries.

The team is full of diversity as the players belong to different parts of the globe and carry along their experiences which can be the driving force that can lead it to a better future.

Los Angeles Gladiators underwent a large number of changes lately which can disrupt the balance and affect the overall performance. This can have adverse effects not only on the win-rate percentages but also on the morale of players.

Los Angeles Gladiators has a win rate percentage of 55.75% in the “Series” category. It has won 63 matches and lost 50.

In the “Games” category, Los Angeles Gladiators carries a win-rate percentage of 53.38%. The team has won 245 matches and lost 214.

Upcoming matches are vital for all teams as they can play a key role in determining the future of a team. The players of each franchise are also super excited to see their team participating in these matches.

The upcoming matches of Los Angeles Gladiators that are expected to take place in the next eight weeks are shown below for giving a better idea to interested spectators.

The overall extremely high win-rate percentages in both categories reflect that the team has performed exceptionally well in the past. This is also complemented by the team’s earnings which are on the higher side when compared to the competitors.