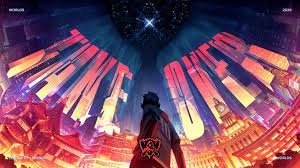 Riot Games has just announced the new anthem of the upcoming League of Legends World Championship and it must be said that it’s amazing! Last year Chrissy Costanza created the world cup anthem: Phoenix The song was a collaboration with Cailin Russo, who is most famous for playing Justin Bieber’s love interest in a handful of music videos over the years.

This year, however, it was a new artist who created the anthem of the World Cup and Riot Games wanted to announce it as follows.

Take Over is the new song and was introduce with a tweet that allows you to download the song on Apple Music, Spotify, Tidal, and Deezer. The track features American rock band A Day To Remember’s lead vocalist Jeremy McKinnon. In the video, there is a player who defeats all of his League of Legends opponents by reaching the World Stage where he stands with other players in front of the trophy. The video closes with all the participants running towards the trophy.