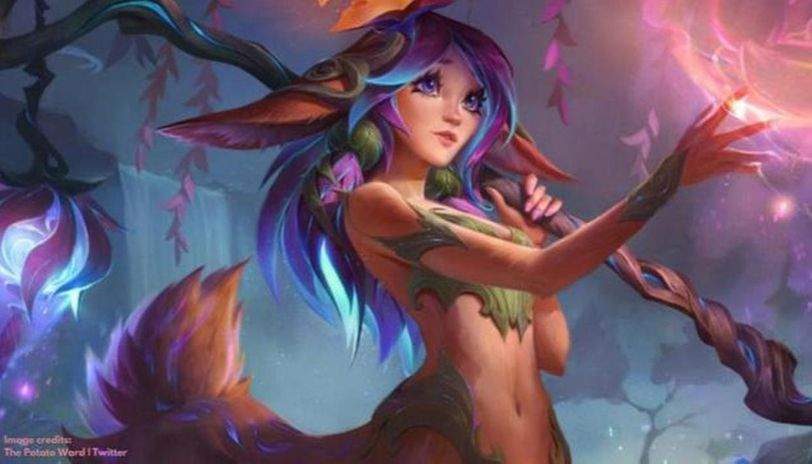 We wrote it that a new champion was coming to LOL and we told you that her name was Lillia. Now League of Legends made it official with a tweet from the official account. A brief teaser video showed us for the first time Lillia

The video didn’t show the ability of the new Champion but there is a lot of speculation about it. It’s seems clear that there is a close relationship between Lillia and the nature. When interacting with the tree Lillia reveals that the tree has taught her a lot, and shown her a world outside of her forest

“Lillia feels a kinship with dreams—she loves them, in fact. But not just because they’re dreams,” explains senior narrative writer David “Interlocutioner” Slagle. “She loves them for what they represent: A whole world full of people who have a beautiful magic inside of them. But people forget this magic. They lock it away. And when Lillia sees that, she wants to do more than just save her mother tree—she wants to help people find the magic within.”

“Lillia is very pretty and delicate, as are many of the fairy-like nature champs in League like Lulu, Ivern, and Neeko,” explains Riot DummerWitz. “But I didn’t want Lillia to just sound like a fairy, because that wouldn’t do her justice. She’s not a spirit of sparkles and butterflies. She’s an entity of dreams”

Read Review
Get 3x Your Deposit – Deposit $/€20 Play with $/€80
Visit
The dream of all gamers is to make money playing games. Thanks to Umode now this is possible.
3

The powers of Lillia could change LOL, she can really become a top Champions.“As soon as we decided that Lillia would be a dream champion, I put sleep in her kit,” says champion designer Dan “Riot Maxw3ll” Emmons. “It’s been a core part of her for a long time, because she wouldn’t be the dream fawn without a sleep. But it changed in a bunch of ways over time.”

Lillia passive is quite impressive. Her passive skills applies dream dust to everything she attack which allows her to put to sleep all her enemy with her ultimate. “Our QA testers discovered that Lillia’s passive was a little too strong at first,” says QA engineer Mikky “Riot Koyuncu” Koyuncu. “Her percent max health damage wasn’t capped against monsters, so they made a point by cheat-spawning Baron and showed that level 1 Lillia could solo it”. Her dream dust applies a percentage of ma health damage over time.

INNATE: Lillia’s abilities apply Dream Dust, dealing 5% of the target’s maximum health as magic damage over 3 seconds, capped at 40 − 100 (based on level) damage against

Lillia swings her branch in the air and deals magic damage to nearby enemies, dealing true damage to those at the outer edge of the circle. When she successfully lands the attack, Lillia also gets movement speed.

Lillia winds up for a huge strike with her branch, dealing magic damage to enemies. Enemies at the center of the impact receive more damage.

Lillia lobs a Swirlseed overhead, dealing Magic damage to enemies and slowing them for a duration. If Lillia’s Swirlseed misses, it’ll continue to roll until it hits an enemy or collides with the terrain.

Lillia casts a lullaby over her enemies and those affected by her Dream Dust become increasingly slowed before falling asleep for a duration of time. When awakened by damage, enemies take additional magic damage.