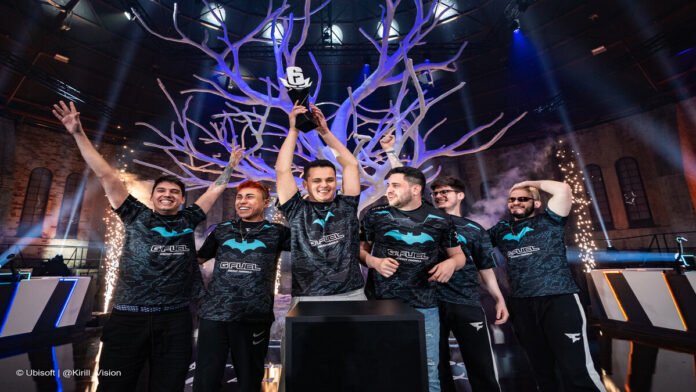 The final of the Six Major Sweden was played this Sunday (14), a face-to-face Rainbow Six Siege tournament held in the city of Gävle (without the presence of the public). The best-of-five series brought together the two best teams in the major, FaZe Clan and Ninjas in Pyjamas.

With a score of 3-2, FaZe took the title, $200,000 in prize money, and 375 points for the ranking that will nominate the participants of the Six Invitational 2022, scheduled for February 2022 in Canada. See how the final went:

Litoral may have been NiP’s choice, but FaZe, which started on the Attacking side, showed they wanted it for themselves. Jaime “Cyb3r” Ramos got a clutch for FaZe to also get the second point. The defense entered the game in the fourth round when they managed to stop the enemy’s momentum. But the Clan people had everything and closed the first half of the map 5-1.

From the beach to the field, NiP started (Defense) well their campaign to tie, but Gabriel “cameram4n” Hespanhol made room for the draw. From round 5 onwards, FaZe resumed the rhythm of the coast and started to play better, using explosives and kills very well at the beginning of the rounds. NiP responded well to tie the score at 4-4 and show that it wouldn’t be as easy as Litoral.

NiP plays Round 11 very well thanks to the use of drones to get the map point, but FaZe took the map to Overtime. Following tournament rules, a team would have to score two points on the scoreboard to win. The dispute was tough, and the map point almost always belonged to FaZe. But NiP got its first map point by winning round 19 and scoring 11-9.

The finalists continued the fight on the field, now in Chalet. In the attack, Faze tried to open the scoring, but the opponent tied in the sequence. After a quick exchange of rounds, FaZe accelerated to score 2 points in a row. But the ninjas who wear pajamas tied the dispute in 4 to 4. To break the tie, Gabriel “Pino” Fernandes took action in favor of NiP.

The fourth round among the finalists took place under the roof of the financial system. To stay alive in the dispute, FaZe scores the first 3 points as Defense (the third without losing players). After a tactical break, NiP scored its first point. FaZe showed the same performance as the first map to get three more points (and another perfect round).

NiP started playing what it hadn’t shown at the bank branch and defended two map points. Only José “Bullet1” Victor acted for his team to tie the decision.

The definitive scenario of the decision was Café. On the defensive side, NiP managed to stop the opponent’s advance and open the score. The next round was the sign that the fifth map would be tight with FaZe’s tie (and the comeback in the next round). Cyber, the best player in the decision, once again stood out (with the right to two rounds with 4 kills).

We then returned to the frenetic pace of FaZe seen on the coast with a game that didn’t give the opponent a chance. NiP made one last effort and scored 2 rounds, but it wasn’t enough. FaZe Clan victory and title in Sweden.