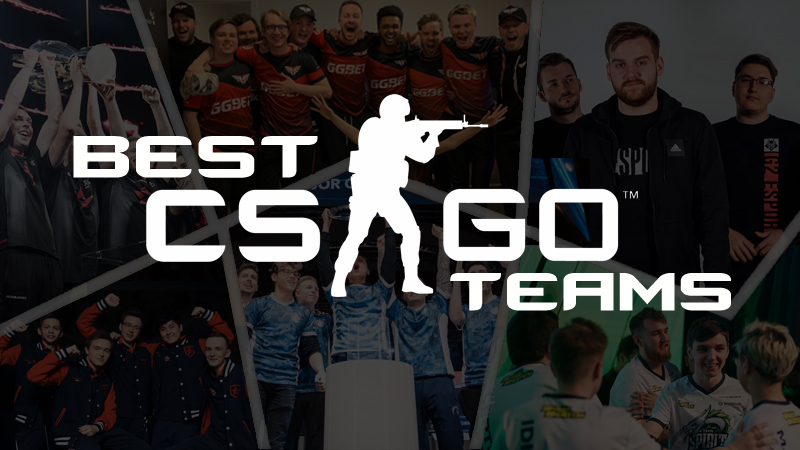 Team ratings have become very popular in esports CS:GO. Unlike more complex games, such as MOBAs or strategies, in shooters, the statistics of teams in matches allows you to determine who performs better than others: not only in the team plan but also separately from teammates.

One of the most objectives is the team rating of players on HLTV. Based on the portal’s data, I share with you the data on the top 10 best teams in GSGO in 2021.

The HLTV rating system is calculated based on the player’s indicators and includes three parameters:

The final rating is also influenced by matches with which teams the player performs well/bad, statistics regarding other team players, and other factors.

Read Also: How to bet on CS:GO

Natus Vincere is a Ukrainian esports organization founded in 2009. The first team of the club was the CS 1.6 roster: Zeus, markeloff, starix, Edward, ceh9. These five won the four largest CS 1.6 World Championships and were considered one of the best teams in the world between 2010-2011.

In early 2021, perfecto was invited to Na’Vi. At the first tournament with a newcomer, the team took second place, and at the Next IEM Katowice 2020 – the first. With the advent of the online era, the results began to decline.

In the fall, the organization attracted a representative of the Na’Vi academy to the games of the Main team – at First B1t played instead of flamie on Inferno. And after a while, he became a full-fledged member of the team.

With the onset of 2021, Gambit has become one of the strongest teams in the world. The team won IEM Katowice 2021, reached the final of ESL Pro League Season 13. And secured participation in the final stage of the spring BLAST series. And also climbed to the first line of the rating from HLTV.org.

G2 Esports is a Spanish esports organization founded in 2013. The club came to CS: GO in February 2015, when it announced the signing of the former roster of the ESC Gaming team. It included players from Poland – innocent, SZPERO, Mouz, Rallen, and MINISE.

Despite all the reshuffle in the roster, Astralis won three top tournaments in 2020. True, with the onset of 2021, the team’s results sharply declined. As a result, after a series of losses, dev1ce decided to leave the Astralis team. The sniper of the team moved to NiP. This transfer has become one of the loudest and most unexpected in the history of CS: GO.

Virtus.Pro is a Russian esports organization founded in 2003. The first CS: GO roster appeared in 2012 – the CS 1.6 roster moved to a new version of the game.

ANGE1, Dosia, Fox, Adren, and KUSher – this Virtus.Pro roster was marked by a historic achievement. The Bears were able to interrupt the NiP win streak. The Swedes have not lost in LAN tournaments for 87 maps in a row. As part of StarLadder StarSeries 5, Virtus.pro defeated NiP twice, the second time in the final.

Since the summer of 2020, Virtus.pro’s results have been gradually improving. At the end of the year, the team won Flashpoint Season 2 and DreamHack Open December 2020, at the beginning of 2021 – cs_summit 7, and also reached the final of IEM Katowice 2021 and secured a foothold in the top five teams in the world.

In 2020, FaZe won only one tournament – IEM New York Online: Europe. Soon Niko moved to G2. A restructuring has begun at FaZe. Karrigan returned to the team, and also Twistzz from Team Liquid came.

Ninjas in Pajamas is a Swedish esports organization founded in 2007. The club was one of the first to join CS: GO in August 2012, signing the legendary roster: f0rest, GeT_RiGhT, Friberg, Xizt, and Fifflaren.

In the same 2017, NiP took first place for the last time at a major tournament – the Swedes won IEM Oakland 2017. NiP’s roster has been rejuvenating over the years, and the veterans went to other organizations one after another. On January 21, 2020, the f0rest transfer to Dignitas was issued. F0rest was the last representative of the team that issued the legendary 87-0 and smashed everyone at the start of CS: GO. F0rest has played for NiP for over seven years.

On April 23, 2021, one of the most high-profile transfers in CS: GO history took place. Nicholas Dev1ce Ridtz, a four-time Major in Astralis, made an unexpected move to NiP. The amount of the transaction was estimated at one million dollars.

Heroic is a Danish esports organization founded in 2016 by former CS: GO members of Team X. The composition looked like this: Friis, MODDII, gla1ve, Valde, and Snappi.

The team won one of the most prestigious tournaments in the game – ESL One Cologne 2020. Two months later, Heroic won the DreamHack Open Fall 2020. At that time, the team was one of the best teams in the world.

Then the team’s results dipped a little. And therefore, it was decided to carry out a reshuffle. Heroic ditched Niko and b0rup, taking Refrezeh and Sjuush from MAD Lions instead. The roster changes took place on February 26, and after nine days, Heroic played the first match at ESL Pro League Season 13 – the largest tournament of the spring. As a result, the Danes took first place, defeating Gambit in the grand final of the championship.

Team Vitality is a French esports organization founded in 2012. The original roster included veterans of the scene – NBK-, apEX, Happy, RpK – and one of the Main talents of CS: GO, which was subsequently recognized as the best player in the world twice – ZywOo.

With the onset of 2021, the Vitality form began to decline. The poor performance prompted the club to replace RpK with 22-year-old Kyojin, a longtime teammate of Nivera and Misutaaa. Nivera himself left the organization due to Valve’s rules, which prevent the full use of the six-member roster.

BIG is a German esports organization founded in January 2017 by three former NRG Esports players – gob b, LEGIJA, and tabseN.

Then BIG stalled a little. He stopped getting into the finals of the championships and sometimes began to fly out altogether in the early stages. But still, he has already won one victory in 2021 – at FunSpark ULTI 2020 Europe FInal.